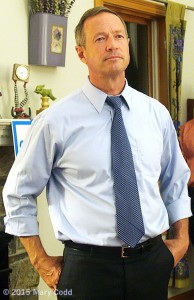 I had the opportunity yesterday evening to hear Democratic presidential candidate, Martin O’Malley speak at a gathering at the home of friends in Hollis, NH.

I was impressed with him, and his positions on issues. He is a progressive Democrat, formerly Governor of Maryland (2007-2015), and Mayor of Baltimore (1999-2007). You can learn more about Governor O’Malley and his “15 Goals to Rebuild the American Dream” on his web site: https://martinomalley.com/

He also was interviewed on television yesterday in Manchester, NH by Josh McElveen on WMUR: