We’ve now made the acquaintance of one female eastern wild turkey. It was hard to judge her size because she made sure to keep me at a distance, but according to the New Hampshire Fish and Game Department she should weigh about ten pounds. 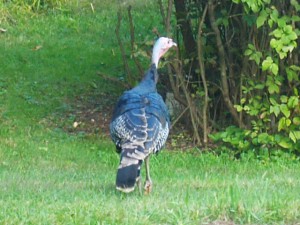 It was pretty exciting for me to step outside and find this large bird strutting though my backyard. Other New Hampshire residents we’ve mentioned this to have, for the most part, been unimpressed. Apparently, wild turkeys are a pretty common sight in these parts. In fact, wild turkeys are present in every county in New Hampshire. What is surprising is that we’ve only seen one, because at this time of year hens and their broods often band together to form large flocks. 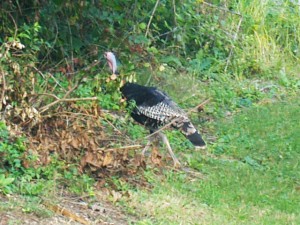 According to the NH Fish and Game Department website, “Wild turkeys totally disappeared from New Hampshire 150 years ago because of habitat loss and the lack of a fish and game department to regulate hunting seasons. N.H. Fish and Game began transplanting wild turkeys into the state in in 1969-70 (this initial effort failed), then again in 1975. Today the population is estimated at upwards of 25,000 birds.”

There are designated hunting seasons for wild turkey in New Hampshire. One in the spring, known as spring gobbler season, it runs May 3-31, with a youth turkey weekend held just prior to the opening of the spring gobbler season. There is a 3-month autumn archery season from September 15 to December 15, as well as a a 5-day fall shotgun season only in WMUs D1, D2, G, H1, H2, I1, I2, J1, J2, K, L, and M. The 2013 fall shotgun turkey season which will run Monday through Friday, from October 14-18, 2013.

There are 13 different hunting seasons in NH and that has me concerned. I don’t know if people hunt near us. And I’m concerned about walking the dogs in the woods on our property and other places near us if people are there hunting. I’m wondering if we should post our land to prohibit hunting on it. Common law in New Hampshire gives the public the right of access to land that’s not posted. But state law (RSA 207:3-a), says that a hunter (or anyone else, for that matter) shall not discharge a firearm or bow and arrow within 300 feet of a permanently occupied dwelling without the landowner’s permission. Doing so is a violation.

I am definitely going to have to look into this issue further.

The NH Fish and Game Department publishes these tips so that hunters can avoid all circumstances that enhance the likelihood of being “mistaken for game.” I think many of them would be useful for anyone who ventures outdoors during hunting season as well as for hunters.