The Queen of Poisons

I noticed several plants in my backyard a few weeks ago with buds that looked like they were ready to flower any day. I shot a few photos as they matured and eventually was able to match my photos with images and descriptions that I found online. The plant is Monkshood, (latin name: Aconitum napellus) and although it is valued in the garden for its beautiful flowers, Monkshood is one of the most poisonous plants ever discovered!

Not Just Another Pretty Flower

Monkshood is also known as aconite, blue rocket, conite, leopard’s bane, women’s bane, Devil’s helmet, soldier’s helmet, friar’s cap, old wife’s hood, auld wife’s huid, wolfsbane and wolf’s bane. It acquired the name Wolfsbane during the Middle Ages when aconitine, the poison extracted from the European wolfsbane Acontium lycoctonum, was painted on arrow tips and used to kill wolves and on occasion criminals, too. The poison had strong ties to witchcraft and was supposedly used in witches potions. Aconitine, the Queen of Poisons, is a neurotoxin derived from various aconite species.

Monkshood is a hardy perennial with tuberous fleshy roots and erect stout stems. The stems of the plants in my garden are about 3 feet high, with dark green, glossy leaves that are deeply divided in palmate manner. The flowers are in erect clusters and are a blue-violet or purple color. Although the plant is considered a perennial, each distinct root lasts only one year. The plant is continued the next year by ‘daughter’ roots.

Monkshood has quite a storied history and has been referred to frequently in literature, television and film. 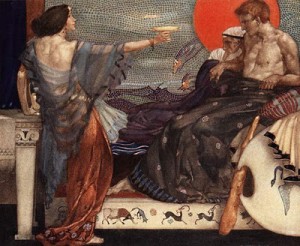 In Greek mythology, Medea attempted to poison Theseus with a cup of wine poisoned with wolfsbane, and in the television show Merlin the lead character Merlin, attempts to poison Arthur with Aconite while under a spell. In the TV series Dexter (Season 7), the character Hannah MacKay uses aconite to poison some of her victims, and in the British murder mystery television series Midsomer Murders, season 4, episode 1 (“Garden of Death”), aconite is used as a murder weapon, mixed into fettucine with pesto to mask the taste. citation

The effects of aconitine poisoning are not limited to fiction. 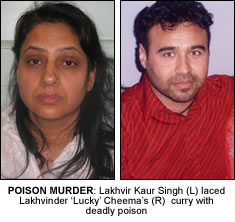 In 2004 Canadian actor Andre Clarence Noble died of aconitine poisoning after eating some monkshood while on a hike with his aunt on Fair Island in Newfoundland. And in 2009, the British ‘Curry Killer’ Lakhvir Singh, killed her lover Lakhvinder Cheema with a curry dish laced with Indian Aconite.

Aconite is a deadly poison but it is reported to have medicinal uses. It has long been used in the traditional medicine of Asia (India, China and Japan). In modern western medicine it has been used as an anodyne (painkilling drug), diuretic (a drug to promote the production of urine) and a diaphoretic (a drug to increase sweating). It is also used in Ayurvedic and homoeopathic medicine.

A Closing Cautionary Note: Based on what I’ve read, gardeners should never plant Monkshood near edibles to ensure that it isn’t picked and eaten by mistake. (That has happened.) You should always wear gloves and wash your hands after touching it because abraded skin could absorb a dangerous dose of the drug. If I had small children I would probably remove it from my garden just to be safe. All species of monkshood should be considered toxic to humans and animals. And all parts of the plant are poisonous, including the sap, so appreciate its beauty in the garden and not as a cut flower.