What are those purple berries?

My husband asked me about the berries he saw on some plants in our yard, right where the lawn meets the treeline. I had no idea what they were, but I was intrigued by the lush foliage and profusion of dark purple berries. As I photographed them I noticed that even this late in the season there were berries in all phases of development; delicate little white flowers, green berries, shiny dark purple berries and dried berries. The plants themselves were easily six feet tall with purple stems.

I did some research and found out the plant is commonly known as pokeweed. (phytolacca americana) I had heard of pokeweeds before, but thought they were limited to the southern United States, and was surprised to find that they ranged as far north as our home in New Hampshire. In fact, pokeweed is found in most of the United States except the Mountain States, Alaska and Hawaii.

According to the information I found, the shoots that come up in the spring are edible and quite tasty. Their taste has been likened to asparagus. However, once the plants grow beyond 6 or 7 inches high and the stems start turning purple all parts of the plant become poisonous for people.

Warning! Only the young green shoots are edible. Everything else is poisonous. Never eat raw pokeweed.

Not too long ago poke salad greens were available canned from the Allen Canning Company in Siloam Springs, Arkansas. 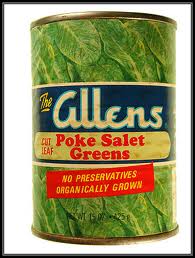 Allens Canning was established in 1926 and still offers a wide variety of beans as well as carrots, hominy, blackeyed peas, and chicken broth. However, they packed their last batch of poke salet greens in the spring of 2000. Poke greens were one of the first spring greens served in southern states and provided relief from the typical winter menu consisting mostly of salt pork, beans, and cornbread. Due to the Dustbowl conditions of the 1930s, people living in Arkansas and Oklahoma emigrated to California looking for work. Soon the West Coast became a prime market for Allen Canning’s poke salet greens, but as those people who were raised on fresh spring poke greens died off so did demand for the canned greens. In addition, poke salad greens had to be gathered by hand in remote locations. Allen Canning relied on people to harvest and bring in bags and tubs of the greens every spring. By the late 1990s they were having a hard time finding people willing to gather poke greens.

You will find the edible sprouts in the springtime within a few inches of the withered remains of the past season’s dead poke stalks. Harvest them when they are less than eight inches tall and before their leaves are completely unfurled. Cut the sprouts off at ground level, and not below to avoid getting any of the poke root. Caution: With the exception of the young shoots and the leaves on those shoots all parts of the poke plant contain some poison.

I’ve found recipes for poke greens in books and online. I’ll have to wait until next Spring to try them. Once I do, I’ll post the tastiest poke recipes in their entirety. For now, here’s a quick list of some of the recipes I’ve found and plan on trying in the spring.

Does anyone remember the song “Polk Salad Annie”?

Here are a couple of YouTube videos to refresh your memory:
Tony Joe White – Polk Salad Annie and Elvis Presley – Polk Salad Annie
You may have noticed the spelling is “polk salad” instead of “poke salad” in the song. Poke is sometimes spelled “polk” because supporters of President James Polk, wore pokeweed twigs during their candidate’s 1845 election campaign, mistakenly believing that the plant was named for him.

If you’d like to buy the song it’s available on “The Best of Tony Joe White” at Amazon:

Soldiers in the Civil War used ink made from the juice of pokeberries to write letters home. This is the origin of one of the plant’s many names: inkberry.

Pokeberry ink was NOT used to write the Declaration of Independence 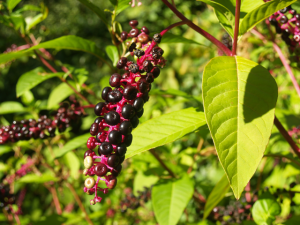 Use Pokeberries for Ink or Dyeing

If you’re interested in crafts projects you may find this information on making pokeberry ink and in dyeing fiber and fabric.
How to Make Pokeberry Ink
How to Process Poke Berries for Dye
How to Dye Cloth With Plants and Berries
Pokeberry Dye

The American Cancer Society reports that, “Research has shown that pokeweed contains a compound that appears to enhance the immune system and has some anti-cancer effects in animals. According to one animal study, pokeweed antiviral protein (PAP), a protein contained in the plant, demonstrated anti-cancer effects in rodents. Another study found that PAP, when combined with an immunotherapy drug called TP-3, holds promise as a potential treatment for advanced osteosarcomas and some soft tissue sarcomas. Laboratory studies have suggested that certain formulations of PAP may be turn out to be useful against cancer cells that depend on hormones for their growth, such as cells from prostate, breast, and ovarian cancer.

PAP also acts against some viruses such as herpes and human immunodeficiency virus (HIV), and it is being studied as a possible antiviral. In laboratory studies, it seemed to help protect cells against HIV, and researchers are studying whether it might help protect people from HIV infection. However, even though animal and laboratory studies may show a certain compound looks promising, studies in people are necessary to find out whether the results hold true for humans.” To read more visit the American Cancer Society website.

Purple Pokeberries Hold Secret to Affordable Solar Power Worldwide
According to Science Daily, pokeberries could be the key to spreading solar power across the globe. This report is based on research done at at Wake Forest University’s Center for Nanotechnology and Molecular Materials. Read more…